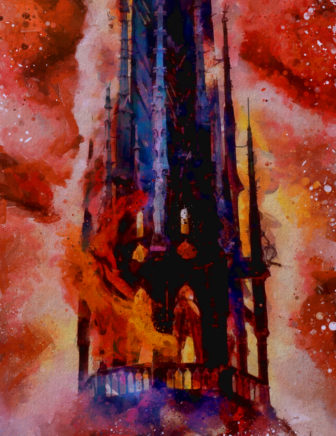 When it was reported that the Notre Dame cathedral had not been utterly destroyed, the disappointment was palpable.

Though for some the disappointment was political in nature, for most it was simpler than that: we want to witness the end of history—not because we want the end to come but because it would make us the final generation (and therefore, presumably, the most important).

Here is what I knew about the Notre Dame cathedral before it caught on fire: It is in Paris. Many Americans with passports have seen it. Its builders made use of flying buttresses. It is the setting of a Disney animated film. It is not, as I was taught in a first-grade French-language “enrichment” class for children who demonstrated “advanced reading abilities,” pronounced like the university in Indiana. (For a few days I told everyone I could that it was pronounced “NEWT-ruh DAHM,” and my dad found it oddly hilarious.)

Here is what I have since learned about the cathedral: There is more to it than the two stone bell towers in front. It became newly popular after the publication of Victor Hugo’s novel (the one the Disney movie is based on) in 1831. It was then that a new wooden spire was built, gone now thanks to the fire. The wooden frame, also now gone, required the felling of 1,300 trees, which was miswritten as 13,000 in a tweet and several subsequent news stories.[efn_note]“La charpente,” Notre-Dame de Paris, accessed April 16, 2019[/efn_note]

While many saw the fire as nothing less than apocalypse, others sought to console us. They reminded us the cathedral has not kept the same form throughout its 850 years. Much has been restored or added, and if there are to be more restorations or additions the cathedral will be no less itself. Not all is lost, they told us; maybe nothing at all was lost. The factoid about cells, seven years, et cetera.

The words are juxtaposed with virtually every death scene from the Star Wars film franchise. Don’t worry, the video taunts each character as they grieve their departed friends or kin; they’re not really gone. Nor will Star Wars ever be gone. The films will always make money; they will still be making them in a thousand years.

Except that isn’t quite right. It is easy to forget, even for historians, that the future does not exist; no future in which Star Wars is remembered or forgotten, in which the temple stands or crumbles, in which the monograph is read or, to put it politely, skimmed.

Place no stock in that. Look around. History must be for someone other than eternity.

Honoré Daumier, The Cathedral of Notre-Dame (1834), via Wikimedia Commons.