If the breathless cable specials that air every Holy Week are any indication, Americans are obsessed with the quest for the historical Jesus—and this quest is far older than the History Channel or The Da Vinci Code. One could argue, in fact, it began in the 1840s with a man who could talk to spirits. 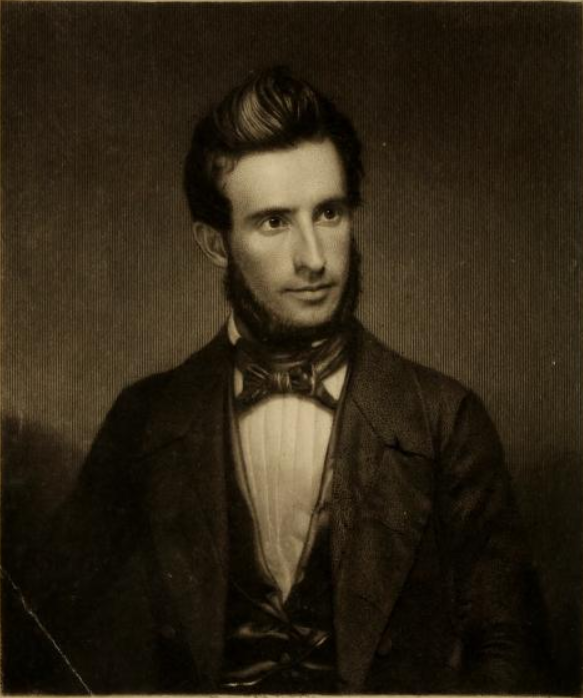 Andrew Jackson Davis, to be specific. Some people are talented at crocheting, others at chess; Davis had a talent for becoming entranced. He learned this in 1843 as a teenaged shoemaker’s apprentice in Poughkeepsie, when a local tailor, inspired by a traveling mesmerist (what we’d now call a hypnotist), experimented on Davis and found him easily mesmerized. Davis developed a regional reputation for entering “the clairvoyant state” and prescribing medical advice, like a vomit-inducing mix of brandy and hot molasses for a child who had the croup. He declared he could “see things past, present, and to come” and even “speak all languages.” It was reported he mentally located “a young man … long absent at sea … at a distance of 8,000 miles,” perceived that he had a broken leg, and successfully predicted his return. The Poughkeepsie Seer, they called him.[efn_note]Gibson Smith, Lectures on Clairmativeness: or Human Magnetism (New York: Searing & Prall, 184[5]), 33–34, 36, 38–40. No thorough biography of Davis exists. The most helpful treatment is Robert W. Delp, “Andrew Jackson Davis: Prophet of American Spiritualism,” Journal of American History, 54 (June 1967): 43–56; it is, however, overly dependent on Davis’s autobiography, as is Robert S. Ellwood’s entry on Davis in the American National Biography. See also William Fishbough, “Scribe’s Introduction: Biographical Sketch of the Author, and History of the Production of This Volume,” in Andrew Jackson Davis, The Principles of Nature, Her Divine Revelations, and a Voice to Mankind (hereinafter cited as Nature’s Divine Revelations; New York: S. Lyon, and Wm. Fishbough, 1847), x–xiv.[/efn_note]

In his 1857 autobiography, Davis rewrote much of life to play up his persona as an unlearned man with striking talents, recounting colorful visions and explaining away a reported early love of books; he would also insist it was the coldness of an older divorcée’s nearby room that forced her to spend the night in his quarters the second time they met.[efn_note]Andrew Jackson Davis, The Magic Staff; An Autobiography of Andrew Jackson Davis (New York: J.S. Brown & Co., 1857), 200, 393–98.[/efn_note] What is indisputable, though, is that what launched Davis from a local curiosity to a national celebrity was a series of spirit communications, some of which dealt with the question of the historical Jesus. 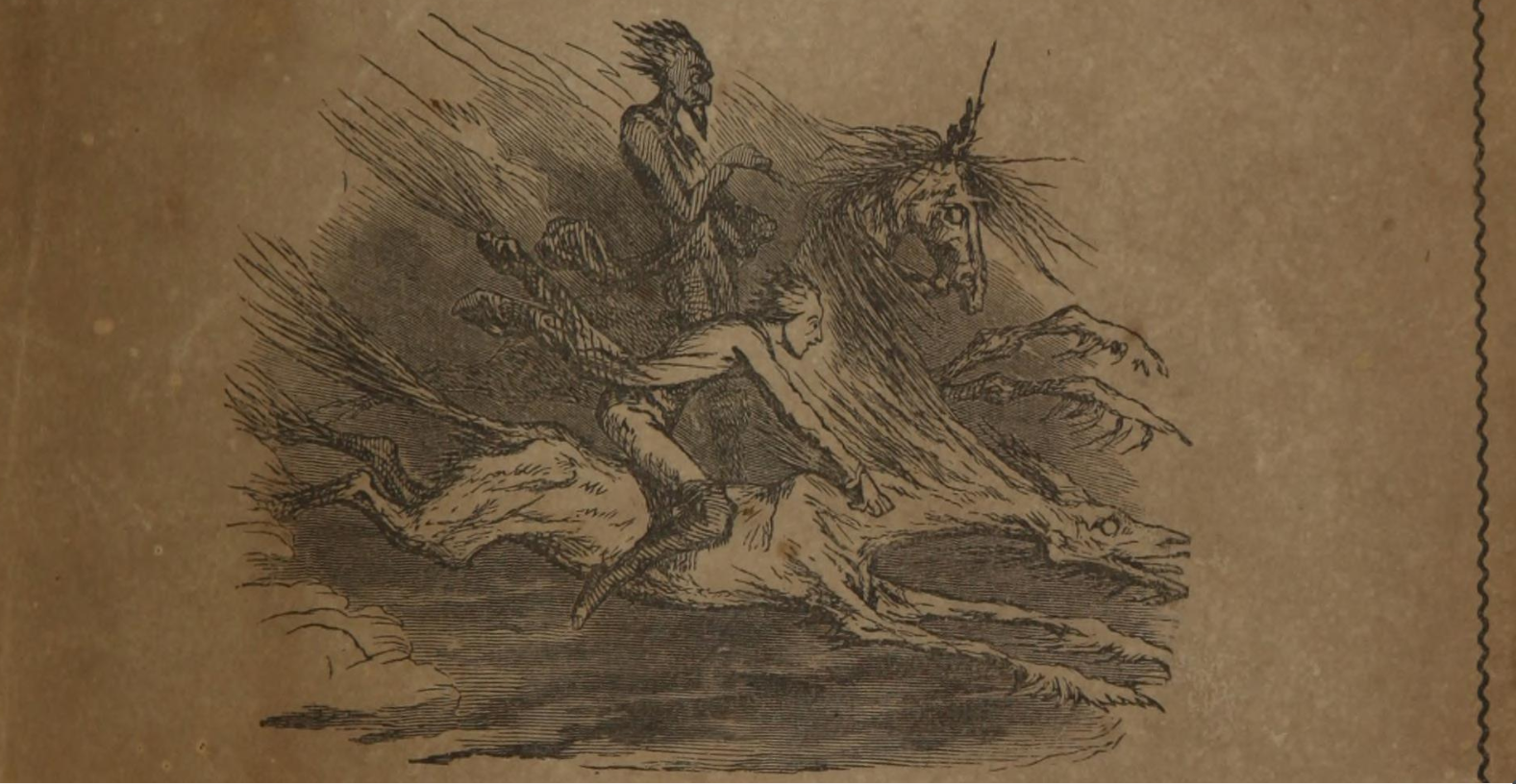 From the cover of Davis’s Lectures on Clairmativeness (Internet Archive).

From November 1845 to January 1847, Davis delivered 157 lectures in New York City, in the same rented rooms from which he ran a medical practice. The lectures lasted anywhere from forty minutes to four hours apiece; a scribe who regularly attended them would later rapturously describe the “peculiar breathing solemnity” of Davis’s halting phrase-by-phrase delivery as he communicated with “the inhabitants of the spirit-world” and accessed their “diversified knowledge.”[efn_note]Fishbough, “Scribe’s Introduction,” in Davis, Nature’s Divine Revelations, xiv–xv, xvii–xviii.[/efn_note] As it turned out, this knowledge was a step up from Davis’s earlier work, and touched on everything from the origin of the universe (“one boundless, undefinable, and unimaginable ocean of LIQUID FIRE!”) to the habits of an “extremely tyrannical” seal-like species found on Jupiter.[efn_note]Davis, Nature’s Divine Revelations, [121], 188–89 (capitals in original).[/efn_note]

Several months in, the spirits had something to say about Jesus as well. What they had to say was peculiarly modern. Davis was not, as had long been done, providing stock biographies of eyewitnesses and near-eyewitnesses for the canonical gospels of Matthew, Mark, Luke, and John. Instead, Davis’s spirit communications questioned the traditional authorship of the gospels, emphasized dissonance rather than harmony between the gospels, and then sought to reveal the real Jesus beneath the biblical distortions. In short, Davis’s spirits made the major interpretative moves underlying the modern paradigm of the historical Jesus.[efn_note]I elaborate on this paradigm in “Heterodoxies and the Historical Jesus: Biblical Criticism of the Gospels in the U.S., 1794–1860” (Ph.D. diss., University of Chicago, 2017),” 15–17. I discuss Davis in ibid., 193–217.[/efn_note]

In Davis’s history, for example, “Matthew was certainly not capable of being an eye-witness to those miraculous works of which he speaks, because he was an officer under the Roman government many years after the death of Jesus, and did not become an apostle until he was greatly advanced in life.” The gospels were not maximally truthful statements of fact that maximally harmonized with one another, for Davis contended that “constant modifications” occurred through the retelling of stories, and firsthand accounts could become “unjust statements” from which the truth had to be ferreted out.[efn_note]Davis, Nature’s Divine Revelations, 509, 566, 571.[/efn_note]

Davis’s Jesus was more or less a free riff on the gospels. Jesus was still born in Israel; and, as in Matthew’s gospel, he and his parents fled to Egypt for a time. But, rather like Davis’s medical practice, Jesus possessed “an intuitive knowledge of the medicinal properties of plants … mineral and animal substances”; he also behaved like a mesmerist, deploying “great physical soothing power over the disordered or disconcerted forces of the human system.” Jesus was no apocalyptic prophet. He was more like, well, an antebellum American social reformer, working towards the “spirit of reform” in all things and aiming for “a general harmony of interests and action … throughout this material sphere.”

While this Jesus was in many ways rather mundane, his life was still being told on the explicit basis of spiritual revelation. Davis would sometimes omit an episode from Jesus’s life because the spirits “presented” him “with no such occurrence.” These same spirits could also be quite precise, as when they “impressed” it upon Davis that the baby Jesus used a manger for no more than forty minutes.[efn_note]Ibid., 560–66.[/efn_note] 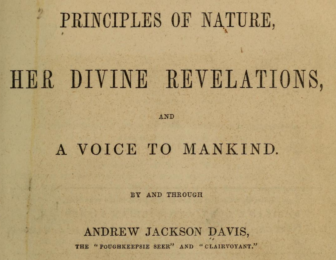 Davis’s lectures were published in an enormous 1847 volume titled The Principles of Nature, Her Divine Revelations, and a Voice to Mankind, popularly called Nature’s Divine Revelations. (The title page carefully claims the book is “by and through” Andrew Jackson Davis, so as not to insult the spirits.) The book sold well and persuaded Davis to shift his focus from lecturing to writing. One enthusiastic reader was Wisconsin newspaper journalist, sometime-politician, and eventual inventor of the QWERTY keyboard Christopher Latham Sholes. Davis also caught the eye of Edgar Allan Poe, whose short story “Mellonta Tauta” purported to be a dispatch from a female balloonist in the twenty-ninth century somehow translated by Martin Van Buren Mavis, the Toughkeepsie Seer.[efn_note][Warren Chase], The Life-Line of the Lone One: or, Autobiography of the World’s Child, 3rd ed. (Boston: Bela Marsh; New York: S.T. Munson, 1861), 167; Ernest Joseph Isaacs, “A History of Nineteenth Century American Spiritualism as a Religious and Social Movement (Ph.D. diss., University of Wisconsin—Madison, 1975), 53; Edgar A. Poe, “Mellonta Tauta,” Godey’s Lady’s Book 38 (Feb. 1849): 133.[/efn_note] 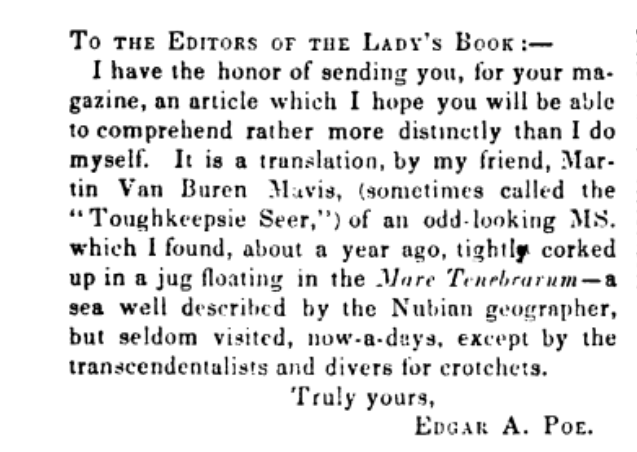 Davis was not the last person to speak with spirits about the historical Jesus. The publication of Nature’s Divine Revelations was followed that same year by a media frenzy over “spirit rappings” heard and interpreted by the Fox sisters of upstate New York, and millions of Americans became interested in the possibility of communicating with spirits.[efn_note]Bret E. Carroll, Spiritualism in Antebellum America (Bloomington: Indiana University Press, 1997); Ann Braude, Radical Spirits: Spiritualism and Women’s Rights in Nineteenth-Century America (Boston: Beacon Press, 1989); Emma Hardinge, Modern American Spiritualism: A Twenty Years’ Record of the Communion Between Earth and the World of Spirits, 3rd ed. (New York: Published by the Author, 1870).[/efn_note]

Mediums and séances found that audiences were hungry for the sort of historical insight into Jesus’s life that Andrew Jackson Davis gave. When the legendary spiritualist newspaper the Banner of Light debuted, one reader from Vermont demanded to know if Christ was “the Son of Joseph the carpenter?” To this, an unnamed medium bluntly responded, “No,” and then offered an alternate history in which Mary secretly married a high priest, out of which sprang a concern for safety and thus “no record was made of the facts we now give you.”[efn_note]”Inquiries of T.P.—Middlebury Vt.,” Banner of Light, May 14, 1857, p. 6.[/efn_note]

The question is whether we should focus on those who advanced the actual scholarship on Jesus, or on those who changed the overall paradigm for how Americans think about Jesus. If the former, we must limit ourselves to those who had extensive knowledge of ancient language and historical context. If the latter, however, the “do-it-yourself” amateurism of Andrew Jackson Davis (if someone aided by spirits from the great beyond can be said to be “doing it themselves”) was quite potent.

After all, most Americans approached the Bible as a text that was democratically available to all and did not require a classical education to understand. If they were to be convinced that the gospels contradicted one another and obscured the historical truth about Jesus, it would take the work of someone who could be similarly understood “by any bright skeptic with the aid of a King James Bible.”[efn_note]Baird, History of New Testament Research, 56.[/efn_note]

So if we set aside the quest for answers about who Jesus was and instead trace how the historical Jesus paradigm first gained traction, we find that the haphazard and unconventional work of people like “the Poughkeepsie Seer” (or, for that matter, Thomas Paine) was as important as any erudite seminarian’s tract. It was often more important.[efn_note]For discussions of Nature’s Divine Revelations in conjunction with the legacy of Paine and the recent English translation of David Friedrich Strauss’s Das Leben Jesu, see “Professor Bush and Davis,” New-York Daily Tribune, September 7, 1847, p. 1; and “Davis’s Principles of Nature,” Boston Daily Evening Transcript, September 29, 1847, p. 2.[/efn_note]

Perhaps you are skeptical. Perhaps you cannot imagine how spirit communications from a Poughkeepsie quack could’ve shaped how Americans thought about their messiah. But who knows? There would’ve been a place for you then, too. There were surely skeptics who attended one of Davis’s lectures not because they believed but because they wanted a laugh. And they were nonetheless participating in the emergence of a new way of understanding the central figure of Christianity.

It can’t be helped. People are rarely aware of the greater forces at work around them. That includes you, reading messages mysteriously transmitted from another corner of the globe, responding to unseen correspondents on your QWERTY keyboard.