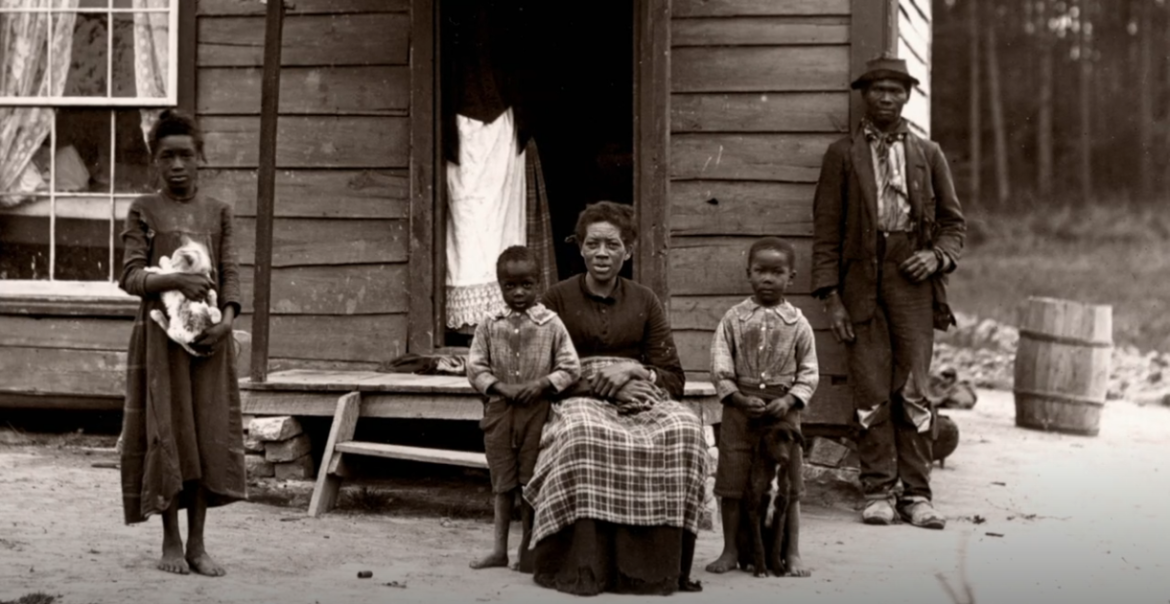 There are lot of fantastic photographs in the new PBS special on Reconstruction, but one nearly made me weep: an African American family posed in front of their cabin, looking off into the distance as they were contemplating the long slog ahead. The image flashes across the screen as historians discuss the ramifications of sharecropping, dispossessing hundreds of thousands of African Americans of their economic security. This family, one among many, was right to foresee misery; I was right to cry.

The study of African American history is not easy. This is doubly true when you are African American yourself, and you realize you’re studying the history of pain and suffering within your own family. How did they endure, you wonder. What happened to my ancestors, you ask as you look through old letters and deeds. This documentary should get plenty of people talking, precisely because it never shies away from those questions. The politics of the time were not just about ornate facial hair and smoke-filled rooms; they were directly connected to the violence and suffering experienced by utterly normal African American families.

It probably surprised some viewers that the second half of PBS’s Reconstruction begins after the traditional narrative of Reconstruction ends, after the Compromise of 1877 and the withdrawal of federal troops from South Carolina, Louisiana, and Florida. Henry Louis Gates and his team are pushing us to think about the long aftermath of the collapse of biracial government in the South. The story did not end in 1877, as the documentary describes the advent of sharecropping and convict-leasing, the deceptive boosterism of the “New South,” and the Nadir period of lynching and anti-black riots in the late 19th and early 20th centuries.

In order to explain how white supremacy defeated the experiment of genuine democracy, Reconstruction draws on political, social, cultural, and intellectual history. And as in the first two hours of the special, we are treated to quite the roster of scholars, giving us an impressive rundown of the recent historiography about African Americans, the American South, and the nation as a whole from 1877 to 1920. The use of scholars such as Karen Cox (to talk about the spread of Confederate monuments across the South) and Rhae Lynn Barnes (on the rise of minstrelsy and blackface in American popular culture) shows not only the long impact of Reconstruction, but how it still reverberates through American culture in 2019.

Indeed, the subtitle of this series could have been From Appomattox to Charlottesville, since it explicitly links the erection of Confederate statues and the propagation of Lost Cause ideology a century ago to the proliferation of white supremacist and far-right organizations today. The series is also fully aware of the hold Reconstruction has on the modern activist imagination, as when William Barber II calls for a “Third Reconstruction,” the Civil Rights Movement being the second.

W. E. B. Du Bois began his 1935 work Black Reconstruction with a short note to the reader, warning them, “I am going to tell this story as though Negroes were ordinary human beings, realizing that this attitude will from the first seriously curtail my audience.” PBS’s Reconstruction does not offer such a warning but nonetheless treats African Americans as the central actors in a drama that has not yet reached its final act. The question of what is to come lies with us, and will be shaped by how we understand this brief experiment and the shadow it still casts.