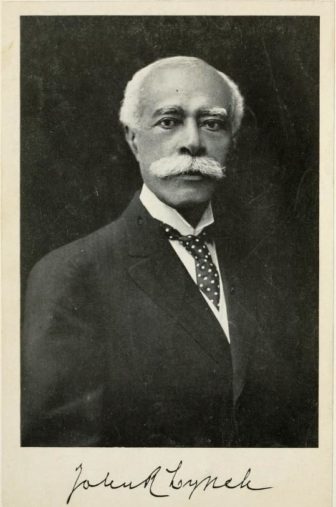 John Roy Lynch (frontispiece from The Facts of Reconstruction)

These were the final words of John Roy Lynch’s 1913 book, The Facts of Reconstruction. Lynch, an African American who had represented the 6th congressional district of Mississippi in the mid-1870s, was writing against a large body of work that claimed Reconstruction was a failure—indeed, claimed that Black self-government was impossible, if not an abomination. Lynch’s “only hope” was that the hold white supremacy had over the nation would weaken and that African American participation in local, state, and federal government, especially in the South, could resume. Like many other intellectuals and activists have argued before and since, Lynch understood that the stories we tell about Reconstruction have never been divorced from present-day concerns about race, politics, and the state.[efn_note]John R. Lynch, The Facts of Reconstruction (New York: Neale Publishing Company, 1913), 325.[/efn_note]

This is certainly the case with the latest PBS special, Reconstruction: America After the Civil War. Hosted by Harvard professor Henry Louis Gates Jr., Reconstruction offers a fresh perspective on this fraught historical period. However, like so many other critical works on Reconstruction, the documentary is colored by the politics of today. This is the greatest strength of the film, though perhaps also a weakness.

The documentary begins, as we might expect, in Charleston. But rather than the famous black-and-white photographs of the Holy City in ruins upon its surrender to the U.S. Army, we are treated to footage from the summer of 2015, following the mass shooting at Emanuel African Methodist Episcopal Church. The failure to secure hard-won gains of Reconstruction is directly linked to modern white supremacist terrorism, part of a centuries-long campaign to define what it means to create a more perfect union. Right from the start, Gates and his team make clear that they want to make a usable history.

Again, this is a part of a larger pattern of Reconstruction historiography, which has arguably been more influenced by the vagaries of politics than the scholarship on any other event in American history. Where many early adherents of the so-called “Dunning School” (named after Columbia professor William Dunning) argued that Reconstruction was a disaster, generations of African American scholars challenged them, most famously W. E. B. Du Bois, whose Black Reconstruction emphasized the honorable achievements of African American politicians and everyday people in their struggle for freedom. In the wake of the Civil Rights Movement, liberal whites became more sympathetic towards the project of Reconstruction and saw it not as a disaster but a tragedy, a missed opportunity to forge a multiracial democracy and repair the injustices of slavery.[efn_note]John David Smith and J. Vincent Lowery, eds., The Dunning School: Historians, Race, and the Meaning of Reconstruction (Lexington: University Press of Kentucky, 2013); Bernard A. Weisberger, “The Dark and Bloody Ground of Reconstruction Historiography,” Journal of Southern History 25 (Nov. 1959): 427-47; W. E. Burghardt Du Bois, Black Reconstruction: An Essay Toward a History of the Past Which Black Folk Played in the Attempt to Reconstruct Democracy in America, 1860-1880 (New York: Russell & Russell, 1935); Randall Kennedy, “Reconstruction and the Politics of Scholarship,” Yale Law Journal 98 (Jan. 1989): 521-39; Thomas J. Brown, ed., Reconstructions: New Perspectives on the Postbellum United States (New York: Oxford University Press, 2006).[/efn_note]

One of the central achievements of the first two hours of Reconstruction is to connect African American achievements after the Civil War to contemporary questions of Black political, social, and economic power. The economic argument is especially worth evaluating. The documentary mentions time and again, especially through the historians featured as talking heads, the failure to redistribute land to freedpeople. This is no doubt influenced by ongoing debates over the causes of and potential remedies for the racial wealth gap, especially the question of federal reparations.

There is also the discussion of the “Lost Cause” myth. The talking heads emphasize that the way many Americans understand the Civil War today, and more specifically the continued support for Confederate monuments in the public square, is a direct result of a story shaped, molded, and cast into historical iron by white Southerners during Reconstruction, folks who had a stake in glorifying their abortive pro-slavery splinter republic.

The array of historians interviewed reflects both the growing diversity of the historical profession, and just how many prominent historians are now tackling issues of race, democracy, and American history with nuance and archival authority. Eric Foner, the modern dean of Reconstruction history, is joined by a fantastic group of historians, from Heather Cox Richardson to Kidada E. Williams.

It is puzzling, though, that many of the topics these historians have written on are not (so far) discussed in Gates’s Reconstruction. The documentary is largely confined to what happened in the South, despite great work on Reconstruction-era politics and policy in the North and the West. There is not much in Reconstruction that could not have been drawn from the scholarship available in, say, 1995. The series therefore misses out on recent scholarship adding complexity to the classic discussion of Reconstruction and race—bringing in, for example, the histories of gender, foreign relations, and disease. This is where I wonder if Reconstruction’s desire to be relevant to the present day—indeed, to a narrow (though important) set of modern debates—limits its scope unnecessarily.[efn_note]For examples of this recent scholarship, see Heather Cox Richardson, West from Appomattox: The Reconstruction of America after the Civil War (New Haven, Conn.: Yale University Press, 2008); Laura F. Edwards, Gendered Strife and Confusion: The Political Culture of Reconstruction (Urbana: University of Illinois Press, 1997); Hannah Rosen, Terror in the Heart of Freedom: Citizenship, Sexual Violence, and the Meaning of Race in the Postemancipation South (Chapel Hill: University of North Carolina Press, 2009); Gregory P. Downs, “The Mexicanization of American Politics: The United States’ Transnational Path from Civil War to Stabilization,” American Historical Review 117 (April 2012): 387–409; Christopher Wilkins, “‘They had heard of emancipation and the enfranchisement of their race’: The African American Colonists of Samana, Reconstruction, and the State of Santo Domingo,” in The Civil War as Global Conflict: Transnational Meanings of the American Civil War, ed. David T. Gleason and Simon Lewis (Columbia: University of South Carolina Press, 2014), 211–34; and Jim Downs, Sick from Freedom: African-American Illness and Suffering during the Civil War and Reconstruction (New York: Oxford University Press, 2012). Also see Forum: The Future of Reconstruction Studies, Journal of the Civil War Era 7 (March 2017).[/efn_note]

Then again, historians can only scratch the surface of their field in a couple of hours. And it is reasonable to hope that a documentary like this, especially one with the backing of PBS, will lead viewers to seek out more information on the Reconstruction era and learn of these exciting new directions in Reconstruction series. The timely release of this series means that, at the very least, Americans can have more background knowledge on which to draw when thinking and talking about race, memory, and democracy. 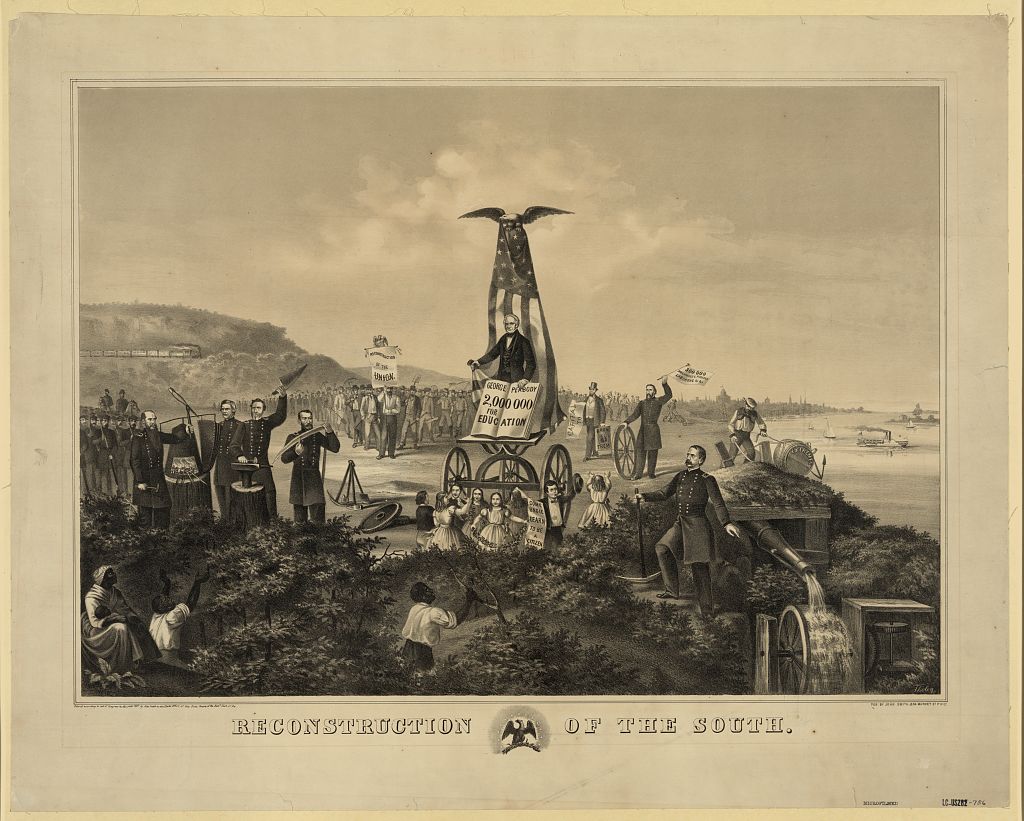 Augustus Tholey, Reconstruction of the South (1867), via Library of Congress.