Lunchtime in Tate, the University of Georgia’s student center, is a crowded season. But it’s where I go every Monday at noon, when I’ve finished my morning shift at the Hargrett Rare Book & Manuscript Library and have two hours before my first oral history. Undergraduates sit along the perimeter charging their phones. The Starbucks line can take an hour. Most of these students were born at the turn of the millennium and have only ever known a nation at war.

I make my way towards the Dean of Students office. When the student worker at the front desk sees me, they grab a key and unlock a cabinet behind them; it’s where they keep the paperwork and recording equipment I need. 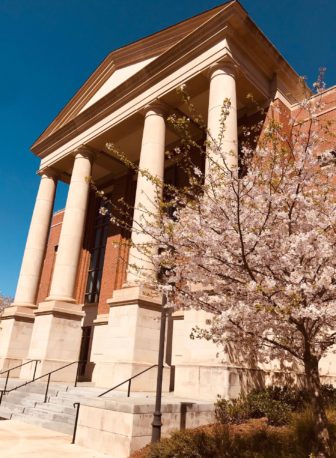 The Richard B. Russell Special Collections Library, where these oral histories are preserved and indexed.

It takes several offices working together to run the Student Veteran Oral History Project. The Richard B. Russell Library for Political Research and Studies supplies the project with things like batteries, SD cards, and microphones. Once I collect the oral histories, the library hosts the audio and gives each history a descriptive index with the Oral History Metadata Synchronizer. The library’s staff also created a finding aid for the project so scholars and researchers can find these oral histories and use them in their work.

Christian Lopez and Iva Dimitrova, in the Russell Library’s Oral History department, helped me shape the project into something that benefits both veterans and those who read their stories. The university does not require institutional review board (IRB) approval for collected oral histories; instead, we rely on a thoroughly vetted Deed of Gift contract between the participant and interviewer.[efn_note]While many historians have long argued that oral histories should be excluded from IRB review, the federal government only lifted this requirement in 2017.[/efn_note]

There’s also Ted Barco, retired Air Force, a strong advocate and ally for student veterans; he runs the Student Veteran Resource Center (SVRC). He worked out a deal with the Dean of Student office to secure a quiet space for recording the oral histories. Most importantly, Ted puts me in contact with students willing to share their stories.

And then there’s me. I’m a PhD candidate in the history department, researching loyalty and white supremacy; most of the East Tennesseans I research and write about are veterans of the Civil War, officially, or veterans of occupation on the home-front. I also teach about the history of veterans in the United States, from the Revolution forward. I’m a social and military historian. I’m also a veteran.

Rarely do I walk into an empty office at the SVRC on the fourth floor of Tate. There are the student workers (veterans themselves), a couple of men sitting with their laptops open—Ted got the funds to build a study room for veterans across the hall but many of the students still come to this smaller room to see Ted. Either everyone is silently studying, or they are all talking shit and telling stories, a very important ritual for veterans. There’s a refrigerator and a microwave, three desktop computers and a printer; a muted TV, tuned to MSNBC, which no one is paying attention to. They have time to kill between classes and this is where they choose to spend it. 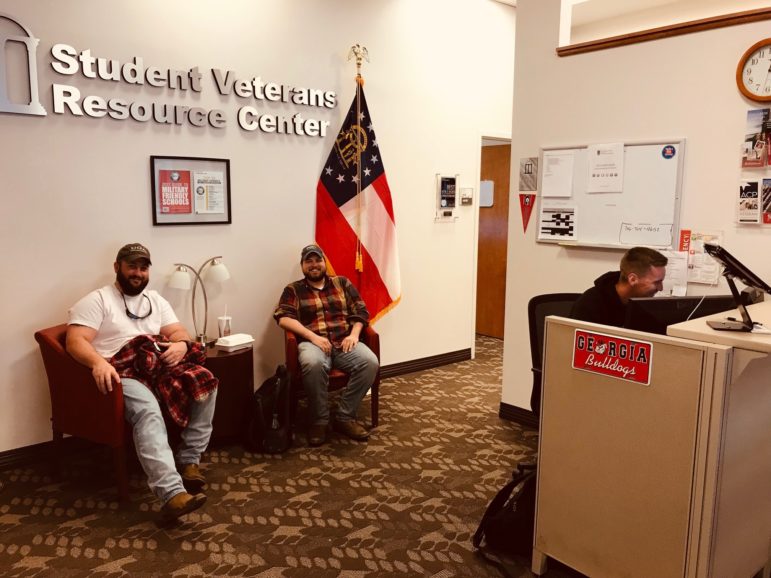 The main SVRC office. Pictured left to right: Joey Millunzi, Cody Ellis, and SVRC student veteran worker, Grant Horton. All of them have shared their experiences with this project.

I go into the conference room and set up. I set the Handy Recorder on top of a stack of books at the head of the table. I check the battery charge, insert the SD cards, pull out the deeds of gift and set them aside. I’m ready to go with fifteen minutes to spare. Veterans are punctual—if they don’t show up in the first ten minutes, they are not coming.

My participant arrives. I meet them in the lobby, bring them back into the conference room, and close the door. I direct them to a chair at the head of the table, the one with the stack of books and recorder set up in front of it, and I can take a seat as well. I explain that any attempts to talk to me before I hit “record” will be politely steamrolled over in an effort to make our recorded conversation more organic. 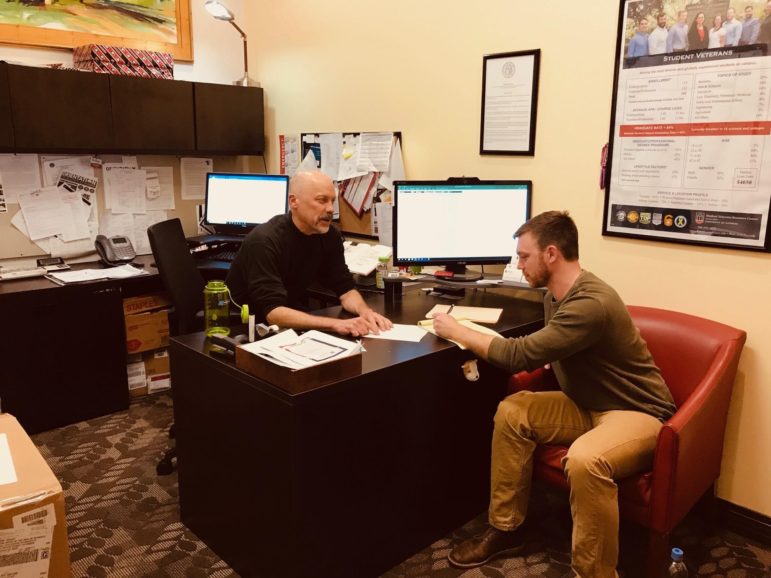 Ted Barco works through lunch with student veteran and future attorney, Stephen Miller. Stephen has already contributed his experience to the project.

Most of my participants are polite but it’s obvious they are trying to hide from me their desire to be anywhere else. Few initially see value in the project and are there because of the little incentives we can sometimes give them (some money, maybe just a gas card) or because they respect anything that Ted Barco believes in.

It helps, though, that I’m veteran, so there’s a trust between me and the participant that wouldn’t be guaranteed with a civilian historian. It also helps that I am a woman veteran, since many veterans would be hesitant to share stories about racism, bullying, and sexual harassment with a white man.

I make sure to give them a brief biography of my own experience in and out of the military: joined the Army in 1998; was stationed at Fort Lewis on September 11, 2001. Transferred to the National Guard in 2003, out of Sandston, Virginia. A combat medic for an air assault Blackhawk unit, spending 15 months with them deployed in Iraq. Came home divorced, with PTSD. I stumbled in my transition home. I make that known.

I tell them up front that I have paperwork for them to sign, but we will do it after the history is complete so they can make an informed decision about what they sign away. I tell them, “Should you begin admitting to war crimes, I’m going to pull the SD card out and destroy it in front of you.” It’s a little dramatic—no one is actually admitting to war crimes—but it breaks the ice and helps make it clear that this is not an interrogation. I make sure they understand they have total control over the accessibility of the archival material and that they can change it at any time. They have options; most decide to have it so only registered researchers at the special collection library can access the oral history. Others, though, agree to have it all online.

A lot of thought has gone into the questions I ask the participants. I got feedback from both the Russell Library and the SVRC; we wanted to make sure there were no leading questions, nothing that pushed any particular narrative, just walking the participants through a simple chronology of their service and transition into civilian life. Where did you join? Why did you join? Was this a common path in your community? Do you have a family history of military service? What was the family reaction to your enlistment?

This makes my project very different from the Tennessee Civil War Veterans’ Questionnaire, a survey developed by a Vanderbilt Southern Agrarian and disseminated more than fifty years after the Civil War. It was leading question after leading question, propping up a “Lost Cause” interpretation of the Civil War. Another important difference, of course, between that questionnaire and my project is that I am talking to recently-separated service members, not men decades away from their wartime experiences and long-descended into nostalgia.

Afterward, however, many of them have told Ted (not me) that it felt good to say their story out loud. Many veterans don’t talk about their service from start to finish like that, and they are especially guarded around civilians. They are very aware that they are an atypical presence on campus; 50 percent of the University of Georgia’s student veterans are between the ages of 22 and 30, and another 46 percent are between 31 and 62. Many have families, and most have to work while they take classes, which is not unusual for American college students but a little more so at a flagship state university.

I am excited for the day when researchers come here to study the oral histories I am collecting. I am moved by those who have been so generous in donating their stories; they are a diverse group, and they are not done serving their community.

And my work on this project has shaped the questions I ask in my own research on East Tennesseans in the Civil War era. What was their military experience like on the ground? What compelled them into service? What did they do after they got out of the military? What lessons did they learn? How did the passage of time alter their perception of their military experience? I am happy that future historians will be better able to examine these questions about the veterans among us today, in part because of projects like at the University of Georgia.

It is important, though, to keep this in mind when you are collecting these kinds of histories: the participant is the one doing the most important work, not you. You cannot walk into one of these appointments with any expectations or agendas. You have to listen and show them you are listening. It’s their story to tell, not yours.