Declassified by the Central Intelligence Agency.

As a dossier from the Office of Strategic Services explained in 1940, Adolf Hitler “love[d] the circus.” He took great pleasure in its non-bourgeois appeal, artistic milieu, and the knowledge that performers were risking their lives for his enjoyment. His second-in-command Hermann Göring enjoyed the circus, too; whenever there was a circus nearby one of Göring’s estates, he and Hitler made sure to get front seats. And as confounding as it sounds, Hitler and Göring were undoubtedly aware that the “gypsy milieu” of the circus included actual Roma and Sinti, and that some of the trapeze artists they adored were Jewish.[efn_note]“Hitler, Adolf, 1940,” President’s Personal Files 5780, Franklin D. Roosevelt Presidential Library and Museum; “Hitler and Goering loved a circus,” Cairns Post (November 30, 1946): 7.[/efn_note] 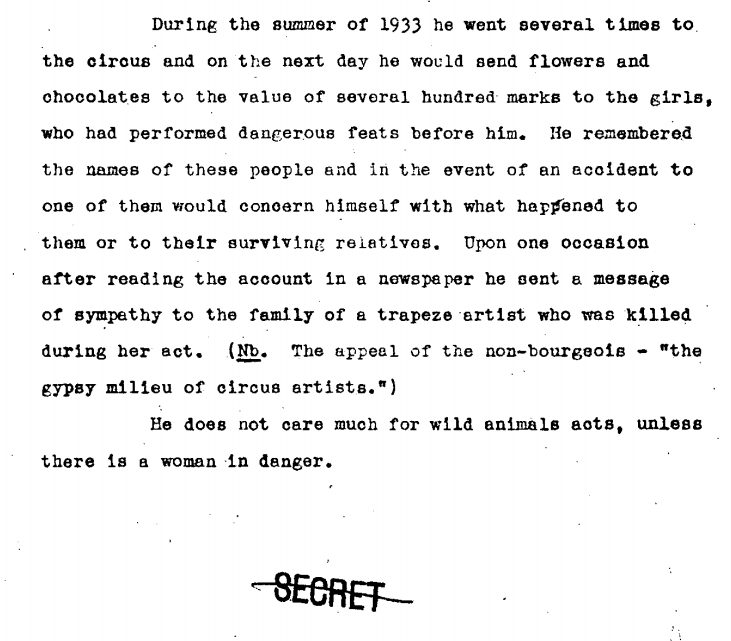 Declassified by the Central Intelligence Agency.

“For centuries,” historian Malte Gasche tells me, “European circuses have been run by minority groups (i.e. Sinti and Roma, Jewish and Yenische), with performers from across the world and of all backgrounds, including people with physical disabilities.” For Europeans with non-marginalized identities, circuses have long served as what Gasche calls “a narrow gateway for the acceptance of otherness.”

Given the circus’s history and enduring popularity in 1930s Germany, the Chamber of Culture (Reichskulturkammer) was quite mindful of the circus’s usefulness for propaganda. The death-defying feats by daredevils, the electric charisma of circus performers, and the taming of dangerous animals all came to be symbols of German national pride. Furthermore, circuses appealed to all ages, were an affordable form of popular entertainment, and came in both stationary and traveling forms, accessible to both big cities and small towns. 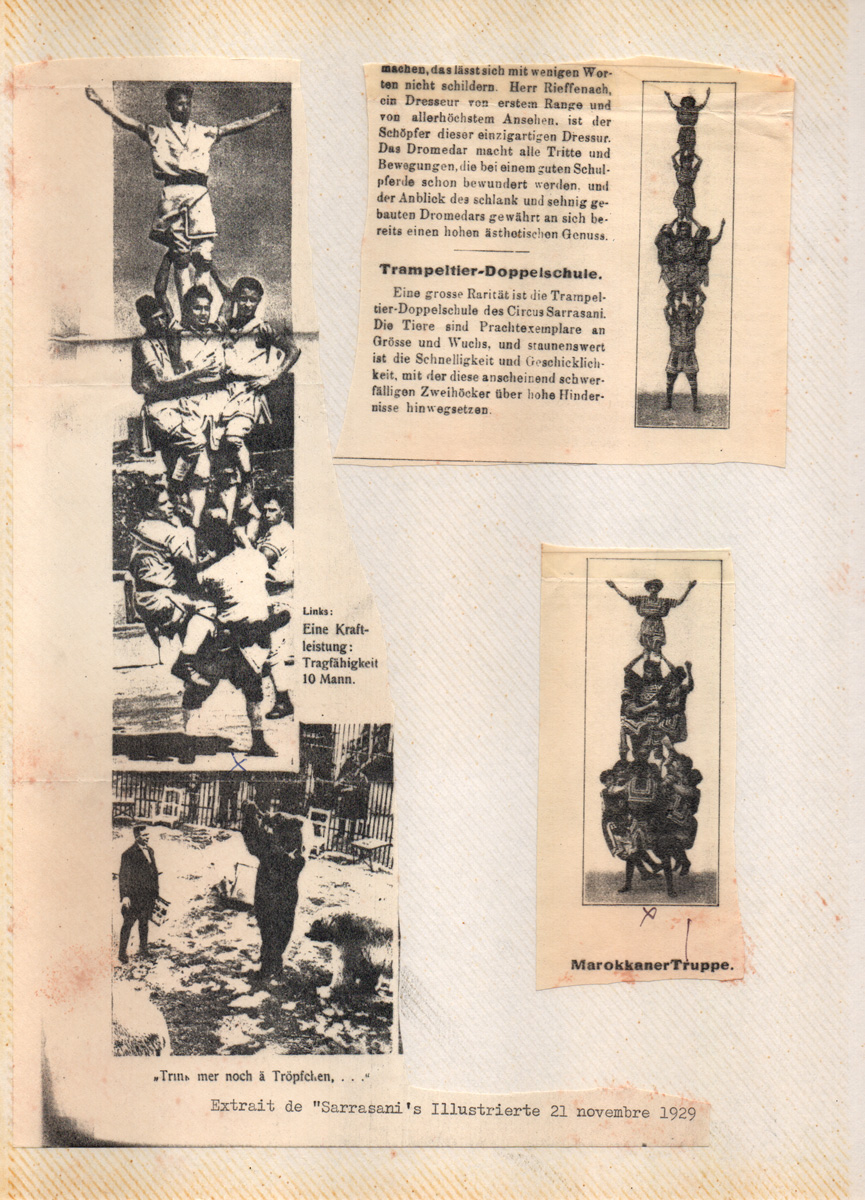 Though the outbreak of World War II ended most small outfits, a few German circuses managed to survive, most notably the Sarrasani Circus of Dresden, famous for its tumbling and trapeze acts. By the 1930s, it had also earned the nickname Judenzircus, because so many of its performers were Jewish.[efn_note]Hans Stosch-Sarrasani, Durch die welt im zirkuszelt. Mit 30 abbildungen (Berlin: Schützen Verlag, [1940]); Gustavo Bernstein, Sarrasani: Entre la fábula y la epopeya (Buenos Aires: Biblos, 2000), 76; Raffaele De Ritis, “Circus Sarrasani,” Circopedia: The Free Encyclopedia of the International Circus.[/efn_note]

German efforts to “Aryanize” the circus came slowly but inexorably. Beginning in May 1933, all foreigners were required to have a work permit; and by February 14, 1935, all German circus directors had to prove their “Aryan origin.” The Nazi regime also instituted rules prohibiting the “wearing of ‘foreign [artfremde]’ costumes”; banning Jews from any “performances of ‘German culture’”; and forbidding black people, “people with mixed background,” and people with disabilities such as gigantism and dwarfism from the circus arena entirely. For as long as it could, the Sarrasani circus defied all of these strictures, continuing to feature star performers of color who were foreign, black, Jewish, mixed-race, and disabled, as well as performers who defied gender norms and sexual boundaries. But by the start of the war, it had purged most, though not all, of its non-Aryan performers.[efn_note]Malte Gasche, “Historical Context,” Diverging Fates, Feb. 22, 2017; Ernst Günther, Sarrasani, wie er wirklich war (Berlin: Henschel Verlag, 1985); Michael Burleigh and Wolfgang Wippermann, The Racial State: Germany, 1933–1945 (Cambridge: Cambridge University Press, 1991).[/efn_note]

By 1939, it became politically impossible for Jewish, Sinti, mixed-race, and other non-Aryan performers to acknowledge their status. As a result, some performers procured or produced falsified documents stating Aryan heritage while many others simply had no documentation. Circus performers not only tended to invent identities, but also relied on a strong oral culture. There are some extant written accounts, including the memoirs of Sara Hauptman, a Jewish lion tamer; and Walter Winter, a Sinto who was briefly part of a traveling circus; both of whom survived the Holocaust.[efn_note]Sara Hauptman, The Lioness of Judah: A Jewish Lion Tamer’s Memoir of Resistance and Survival (Colorado Springs, Colo.: Dancing Queens Press, 2006); Walter Winter, Winter Time: Memoirs of a German Sinto Who Survived Auschwitz, trans. Struan Robertson (Hatfield, Eng.: University of Hertfordshire Press, 2004).[/efn_note]

Images tell a different story of performers’ survival strategies. Located in the Burns M. Kattenberg archives at Harvard’s Houghton Library, a series of headshots reveal aerialist sisters, Marion and Irma Schroder, gradually lightening their brunette finger-wave bobs until they were white-blonde, setting off dyed brows plucked as thin as Marlene Dietrich’s. In 1937, the Schroders emigrated to the U.S.[efn_note]“Marion and Irma,” Folder 126, Box 4, Burns M. Kattenberg collection on contortion and other papers, Houghton Library, Harvard University.[/efn_note]

The oft-repeated pattern—of dark haired, dark-eyed performers in Germany emigrating to the U.S. before the outbreak of WWII—suggests they were Jewish or another persecuted group. In one case, that inference can be confirmed. King Brawn billed himself as the “modern Houdini” and, like that famous escape artist, hid his Jewish ethnicity and faith. Unlike the Schroders, King Brawn was famous enough that American papers wrote up his wartime act in detail, sometimes noting that he was Jewish.[efn_note]“King Brawn,” Folder 207, Box 6, Kattenberg collection.[/efn_note] 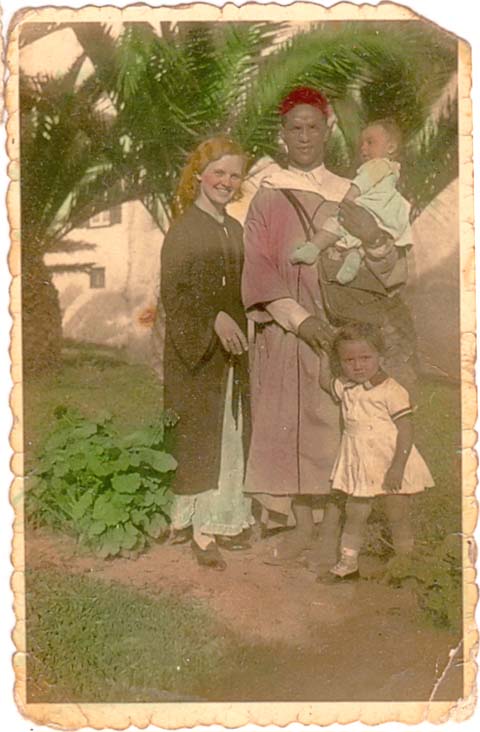 Houssein ben Ibrik, Gertrude Appel, and their children Fatima and Ali, c. 1937. All photographs of the family are courtesy of Paula Lee.

These summaries hint at lives of unusual complexity and ordinary subterfuge, yet they remain under-researched. We still have little information on characters such as Turcho Chukoev, a Bulgarian Roma musician who played for circuses until the outbreak of World War II; or James Samuel Wonja Michael, who was part of a Moroccan tumbling troupe.[efn_note]Raluca Bianca Roma, “Turcho Chukoev, a Bulgarian Roma circus musician,” (trans. by Elena Marushiakova), Diverging Fates, Feb. 22, 2017; Martin Holler, “James Samuel Wonja Michael (1916-2007): From the Moroccan Tumbling Troupe to the French Foreign Legion,” Diverging Fates, Dec. 24, 2018.[/efn_note]

The desire to fill in these historical gaps prompted a two-year collaborative research project: Diverging Fates: Travelling Circus People in Europe under National Socialism. Headed by Malte Gasche, the project is excavating the lives of circus performers of color while being mindful of their community codes and boundaries.[efn_note]Gasche also sits on an International Holocaust Remembrance Alliance committee focused on atrocities committed against Roma peoples.[/efn_note]

As often happens, I became involved with Diverging Fates in a rather circuitous way. I spent several years researching and writing about the epistemological foundations of the modern menagerie, and became curious about the handlers-of-origin who accompanied animals as they entered European consciousness. Parallel to that scholarly work, about a decade ago, I began verifying family lore about Houssein ben Ibrik, a Moroccan strongman-acrobat who performed in the Sarrasani circus with his two Mischling children during the full flowering of the Third Reich.

I posed questions to members of my extended family; eventually, they produced a handwritten memoir and placed it in my hands. Written in French by ben Ibrik’s youngest child and only son, Ali, it discussed his unusual childhood in Nazi Germany, and what happened after the Reich fell. To read his terse account of how he and his orphaned sister went from “Mischling” in the Third Reich, to “Moroccan” in defeated Germany, to “Afro-Allemand” in liberated France, is to confront that peculiar interregnum between “Axis humiliation” and “Allied triumph.” My subsequent quest to better understand his experiences has become The Madwoman’s Son, a (nearly finished) work of historiographic metafiction, because there are places that scholarly work cannot reach, and imagination must fill in the gaps.

Recently, Diverging Fates launched another platform, Forgotten Cosmopolitans, which intends to gain new insights through involvement with Europe’s Nazi-era circus people and their descendants in three subprojects: 1) conducting research in partnership with community members and creating a website out of it; (2) organizing an international teacher training seminar in Eisenstadt, Austria, with members of the circus community as speakers; and 3) an exhibition in Berlin in 2020. We believe it is time to give this community, both its living and dead, the love and remembrance they deserved; not the perverse infatuation possessed by those who wished them dead.