On New Year’s Day in 1933, William Cecil, a nineteen-year-old student studying far from his English home, wrote to his sister Con about his new school. He missed her sorely. Sometimes, during classes that dragged on too long, William would daydream of seeing Con and her friends playing and laughing on a Nottingham street. “Then I get a jolt,” he wrote, “the lecturer is stressing a point on how to understand Leninism, and so the picture passes.”[efn_note]Russian State Archive of Socio-Political History (hereinafter cited as RGASPI), f. 495 op. 198 d. 466 l. 47.[/efn_note]

William was not an ordinary student. He was a member of the British Young Communist League and had been dispatched in late 1932 to Moscow—more specifically, the International Lenin School, a training academy for revolutionaries. He was there to learn Marxist-Leninist theory and practice.

William’s letter never made it to his sister in Nottingham. It was intercepted by Lenin School authorities and became part of a disciplinary case against William, who had broken school rules by discussing the content of his lectures and using his real name rather than his revolutionary nom de guerre. William was lucky; he avoided expulsion, finished his studies, and returned home in 1935. His letter to Con was filed away somewhere and eventually made its way to the Russian State Archive of Socio-Political History, usually referred to by its Russian acronym RGASPI (Rossiiskii Gosudarstvennyi Arkhiv Sotsial’no-Politicheskoi Istorii).

I spent a month there last year, researching materials related to Ireland and international communism, and I encountered many stories like that of William Cecil: activists from across the world transplanted to the exciting and often bewildering world of post-revolutionary Moscow. At that time, the city hosted a complex network of subversive institutions, the records of which are now maintained at RGASPI.

Chief among these institutions was the Communist International (Comintern), a bureaucratic behemoth that operated from 1919 to 1943 and whose agents crossed the globe in the service of revolution. Many if not most of the researchers in the large reading rooms of RGASPI spend their days poring over the voluminous paper trail the Comintern left in its wake. 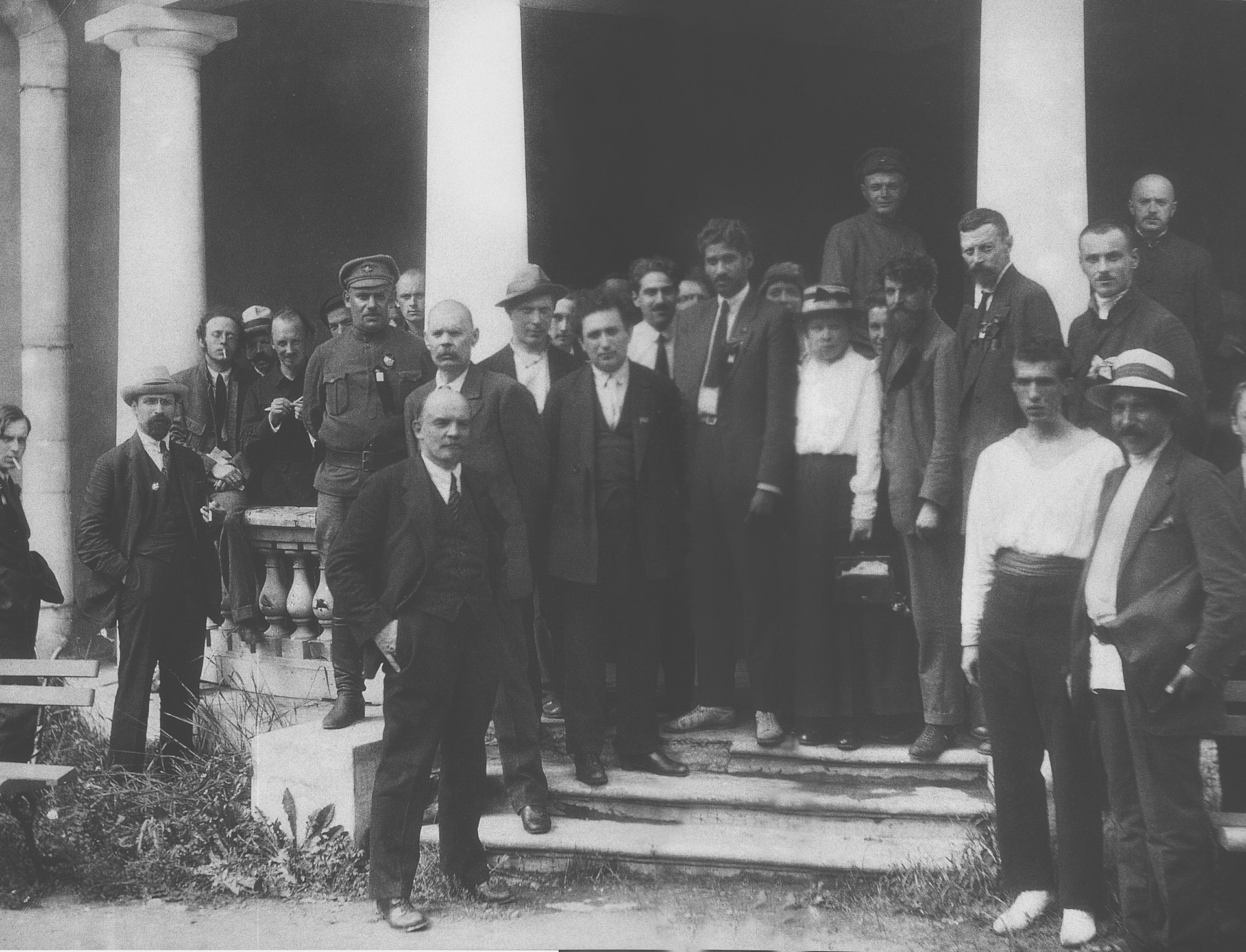 Delegates at the Second Congress of the Communist International, 1920 (Wikimedia Commons).

These documents were largely untouched for decades, though from the 1960s to the early 1990s a few Soviet specialists and trusted foreign communists were allowed access to the archive. Then came the collapse of the USSR and the subsequent “archival revolution.” Historians accustomed to parsing tea leaves were suddenly free to roam a veritable plantation.[efn_note]For an account of the archival revolution and its impact on scholarship, see Sheila Fitzpatrick, “Impact of the Opening of Soviet Archives on Western Scholarship on Soviet Social History,” Russian Review 74 (July 2015): 377–400.[/efn_note]

Post-Soviet repositories still have a certain mystique about them. Some of my friends and colleagues were surprised I was able to visit RGASPI at all. But while a few institutions have never opened their files and others have reclassified some documents, Moscow’s archives have largely remained accessible to foreign researchers. It can be worrying to hear reports of scholars being fined and deported, though these are normally due to visa issues—researchers were once allowed to use a regular tourist visa, but they are now required to obtain a more laborious “Humanitarian” visa under the aegis of an institutional sponsor. If you’re considering a research trip to Russia, you should definitely consult the archival guides and follow their advice closely. Another good resource is this guide on the University of Reading’s website, put together by a group of experienced researchers.

RGASPI has changed little in appearance since its days as the official archive of the Soviet Union’s Communist Party. Marx, Engels, and Lenin hover above the entrance, staring outwards with blank eyes. A life-size sculpture of Lenin gazes past you as you head towards the elevator (with safety instructions addressed to “Comrades!”). Every few days, new folders were placed for me in a locker behind a blast-proof door. 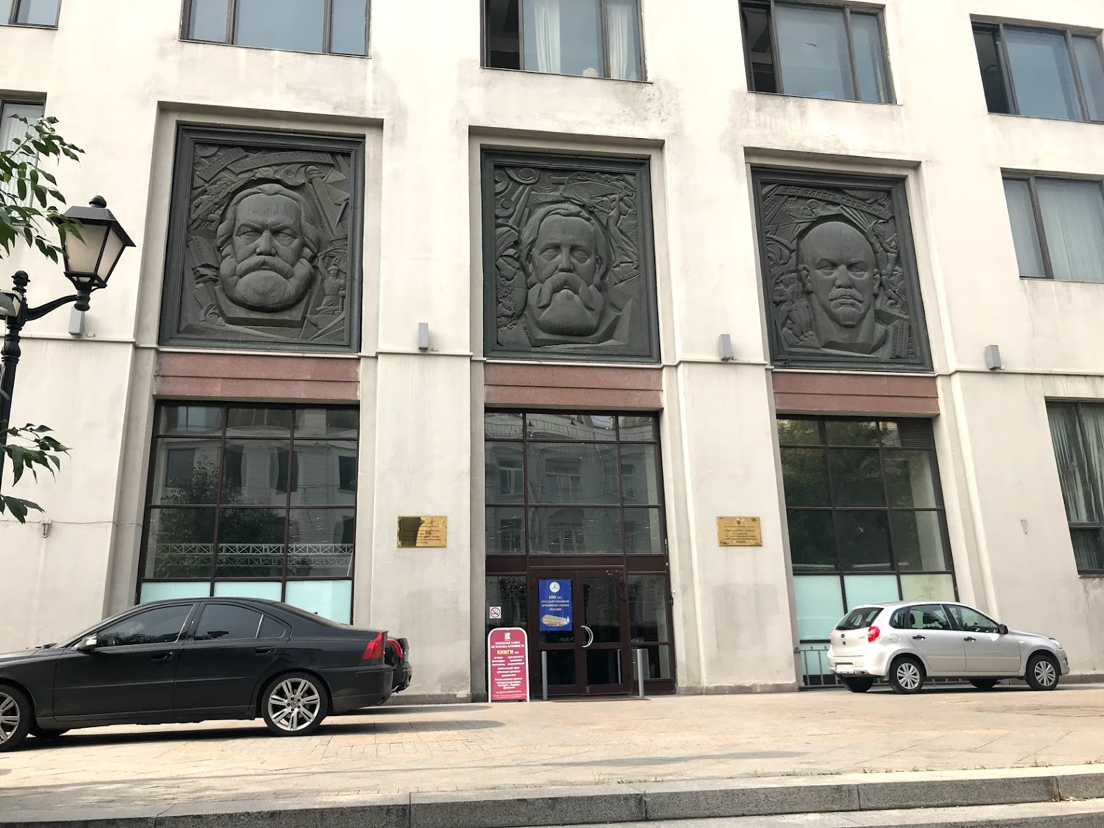 My research centered on the personnel files, or lichnye dela, maintained by the Cadre Commission, a department tasked with documenting nearly every revolutionary who came into the Comintern’s orbit. Communist parties across the world requested biographical statements from their members, and these statements were then forwarded to Moscow, where they supplemented other documents such as work permits, party membership cards, and questionnaires foreign communists had to fill out when they arrived in the USSR.

In the process, the Comintern created one of the greatest repositories of working-class autobiography in modern history. The files bulge with extraordinary life stories, and (mercifully) they are viewable in their original form rather than on the dreaded Soviet-era microfilm.

Declassified documents should be read carefully. If historians are called upon to interrogate the context that shapes our sources, this is even more so for documents produced by revolutionary institutions who were vigilant to a degree hard to distinguish from paranoia. For example, it can be tempting to deduce from William Cecil’s sizeable file that he was fairly important within the British communist movement, when in fact the size of his file says less about his importance than the unwarranted scrutiny he was placed under by the International Lenin School. The researcher must be careful not repeat the errors of the Comintern itself.

Over the course of September 2018, I made my way through all of the Comintern folders on Irish revolutionaries and others who had crossed their paths. This made for fascinating reading. Take, for example, the questionnaire Christopher Clark filled out when he came to study in Moscow in 1931. When asked, “Were you in any other country besides your own?,” Clark responded not with a story of clandestine revolutionary activity but rather a nod to his Catholicism: “France, 1928. Pilgrimage to Lourdes.” I found his naivety touching.[efn_note]RGASPI, f. 495 op. 218 d. 10 l. 5.[/efn_note]

Though my research focused on the Irish, colorful characters from elsewhere kept drawing themselves to me. There was Philip Kandler, who organized Jewish anarchists in East London and translated Oscar Wilde into Yiddish before moving to Russia after learning the “great news” of the revolution. And there was the autobiography of Rose Hockman, a 19-year-old communist born to Russian parents in Croydon (South London), who said she was “a very keen swimmer” and led an open-air life but “never had the thrill of being arrested.”[efn_note]RGASPI, f. 495 op. 198. d. 902 ll. 5-7; RGASPI, f.. 495, op. 198 d. 430. l. 1.[/efn_note]

One evening when the archives closed, armed with a 1926 guidebook to the USSR, I tried to recreate the daily commute of a Comintern worker. This would have begun at the Hotel Lux, a boutique hotel on Moscow’s Tverskaya Boulevard that was transformed after the revolution into a home for foreign Comintern staff. A large tarpaulin is now draped over the building mocking up what it looked like in its tsarist-era prime, and when I peered inside the doorway I could hear construction work; it is apparently being redeveloped into a hotel. There is nothing there, not even a plaque, suggesting it once housed some of the most famous figures in 20th-century communism. 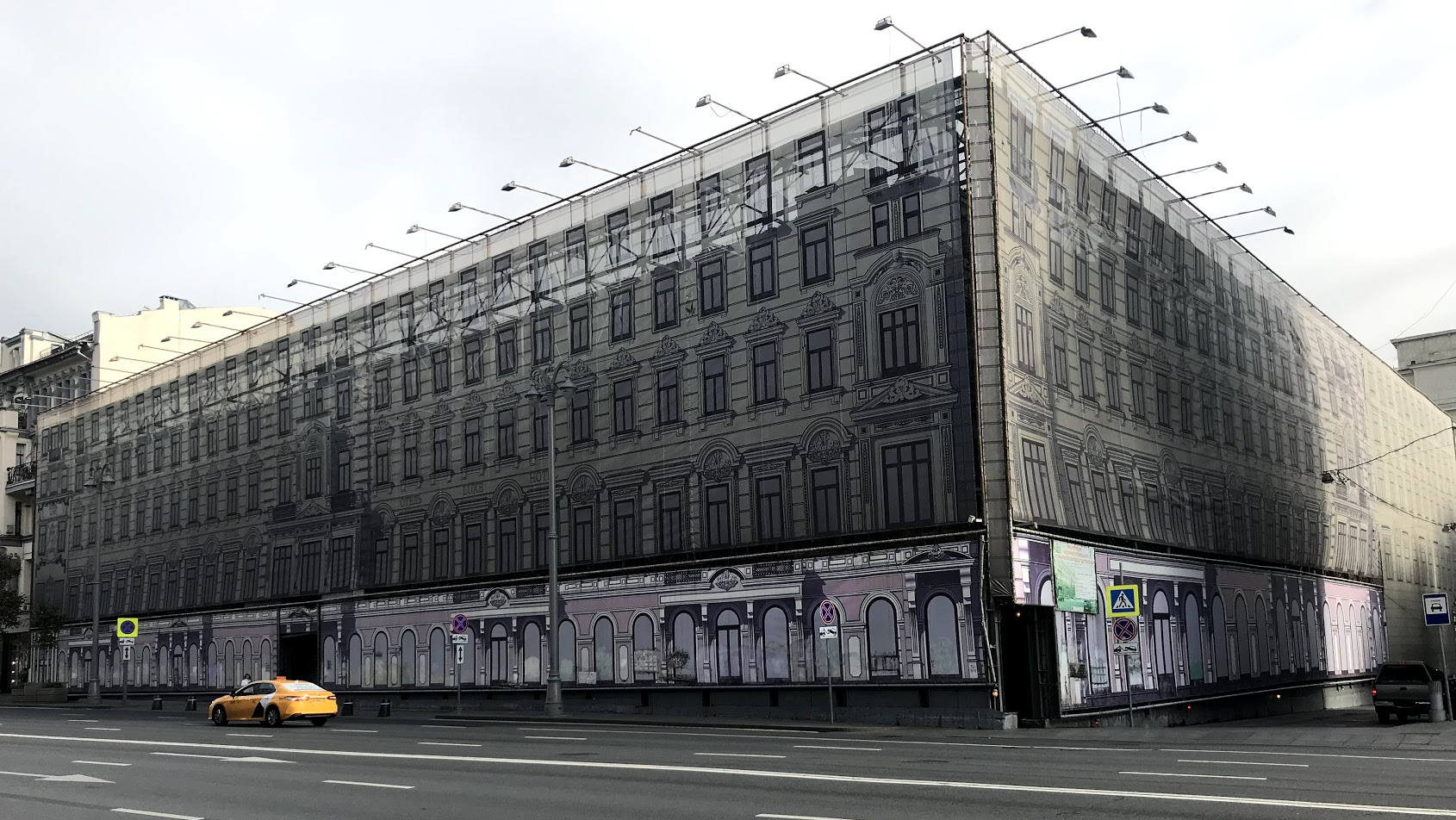 As I walked down Tverskaya towards the former Comintern headquarters, I stopped in front of a department store where my research subjects would have once seen a mural depicting Rosa Luxemburg calling for revolution and the eradication of the bourgeoisie. I found the address where, on a winter night in 1940, secret police searched the apartment of Padraig Breslin, one of the few Irish communists caught up in Stalin’s purges. (It now faces a kitschy Irish pub.)

Finally I reached the building where émigré communists clocked in each day, an impressive structure on Mokhovaya Street that now hosts an upmarket souvenir store. The only indication of the building’s interwar history are a couple of plaques explaining Ho Chi Minh and Antonio Gramsci once worked there. In the 1920s and 1930s, its corridors reverberated with the clacking of typewriters and the footfall of workers carrying reports from department to department. Now you can overhear tourists murmuring about the price of small model Kremlins. 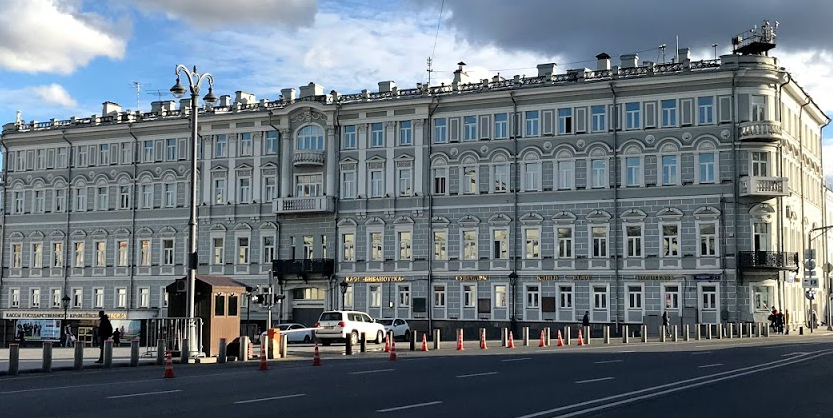 What struck me on my recreated Comintern commute was the contained nature of the émigré communist’s life in interwar Moscow. Your day might begin with a lengthy queue for one of the Hotel Lux’s three showers (a ratio of one shower for every 100 guests), waiting behind people who would later form Eastern Europe’s political elite. At the Comintern headquarters you might share the canteen with a Vietnamese colleague who would later help win a guerrilla war against the United States. If you still had energy after hours spent compiling reports, you might join fellow Lux inmates for a night of songs led by “Big Bill” Haywood, the exiled founding member of the Industrial Workers of the World. It is not difficult to understand why many communists looked upon their time in Moscow fondly.

But while nostalgia is common in the archives of international communism, so too is darkness. I would get a sinking feeling whenever I searched online for more information on foreign communists I came across in the documents and saw they died in 1937, the deadliest year of the Stalinist purges. Political émigrés, automatically suspect by nature of their foreign status, frequently found themselves in the firing line as the revolution they helped build began to self-destruct. A shadow is cast over the city itself: at the bottom of the street where the Hotel Lux stands, if instead of taking a right towards the Comintern building you swing a left, you will eventually find yourself in front of the Lubianka building, where the Soviet secret police had their headquarters and would conduct interrogations.

The archival revolution that came with the Soviet Union’s collapse has helped answer old questions; it has also created new ones. For decades, the chief question in Comintern historiography was how much control the Soviet Union exerted on other nations’ communist parties. The archive has opened up a question beyond the old center vs. periphery debate: what was the lived experience of international communism?[efn_note]For recent works on international communism that use a biographical approach, see Lisa A. Kirschenbaum, International Communism and the Spanish Civil War: Solidarity and Suspicion (Cambridge: Cambridge University Press, 2015); Brigitte Studer, The Transnational World of the Cominternians (Basingstoke: Palgrave Macmillan, 2015); and Julia L. Mickenberg, American Girls in Red Russia: Chasing the Soviet Dream (Chicago: University of Chicago Press, 2017).[/efn_note]

When you research in Moscow’s archives and walk along Moscow’s streets, you continually encounter the discordance that made up so much of the communist émigré’s world. A letter could be both an expression of homesick youth and a breach of revolutionary protocol; an apartment building could be both a respite from work and a site of torture.

You also realize how small this world was, and I don’t mean small in the cliched language of gray bureaucrats in windowless rooms. After all, when we speak of international communists in the Soviet Union, we are often talking about people who spent most of their time on a few city blocks. The revolution may have been global, but for many who lived and worked in Moscow, it was also profoundly—at times, dangerously—intimate. 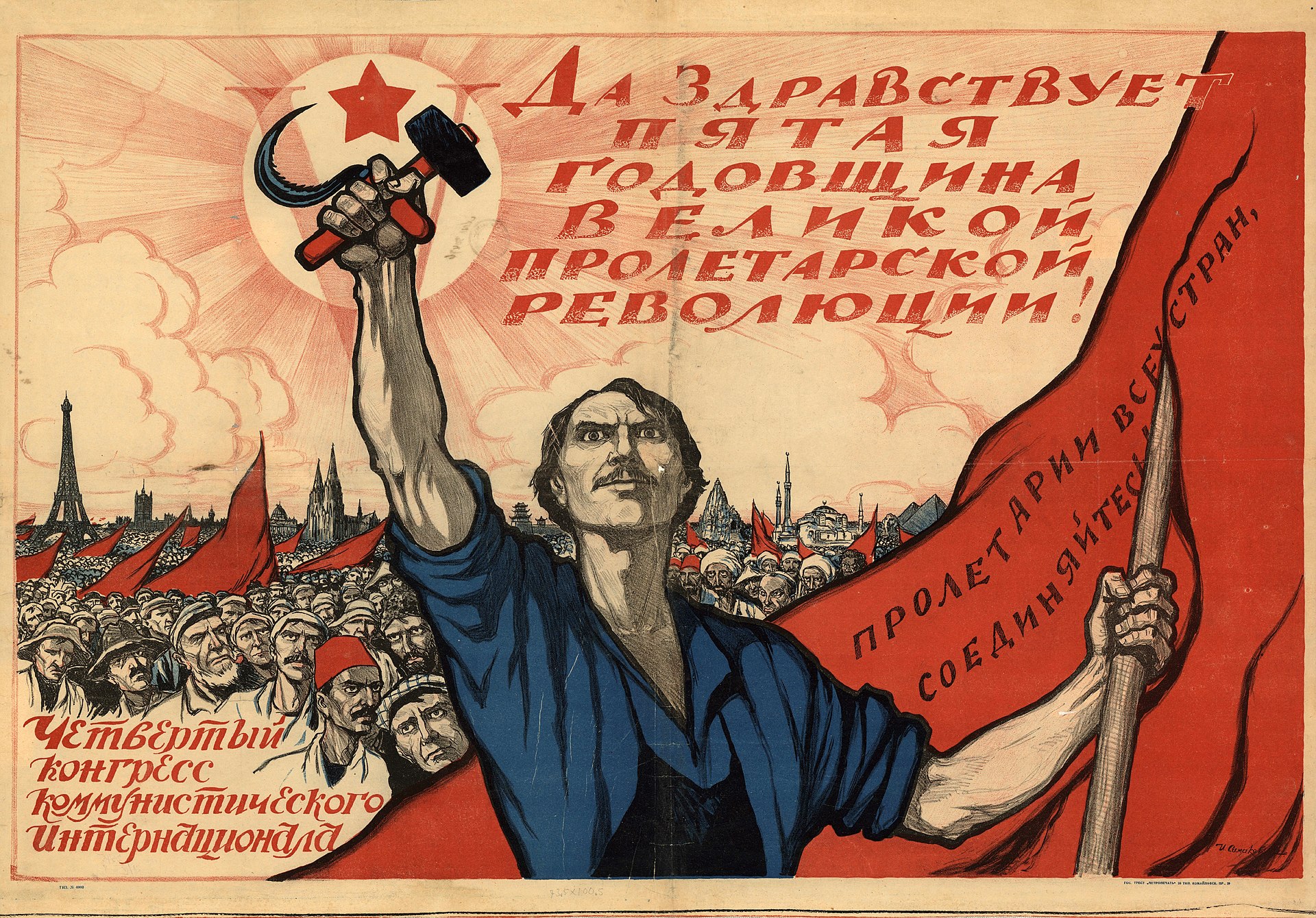 Poster commemorating the 5th anniversary of the Russian Revolution and the 4th Congress of the Communist International (Wikimedia Commons).